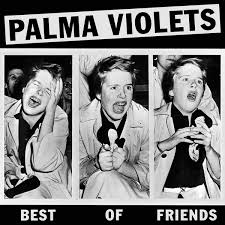 I saw Palma Violets live a few years back.  They were shocking.  They were supporting The Vaccines at Plymouth Pavilions it was just before Christmas and the exact moment I decided to go back to the bar and get two more pints was when the said “This is our Christmas single”.  I honestly sat in upstairs bar and listened to three Waxahatchee songs on my phone before venturing back into the concert hall (concert hall! – it’s a basketball court) to wait for the Vaccines to come on.

Before then The Palma Violets were an exciting prospect.  When they burst onto the scene they were the most thrilling prospect that indie rock has had since the arrival of The Libertines.   They were unpredictable and ramshackle and heroic all at the same time.

Their debut single was ‘Best of Friends’ a tremendous three and a half minutes of guitars and bellowing vocals. Within seconds of it finishing the NME had lauded it and them as the best thing since sliced bread.  It hailed the partnership between Sam Fryer (their guitarist) and their bassist (Chilli Jenson) as the best thing to happen to rock music since the days of Strummer and Jones.  Which is as usual taking things a little bit too far.

But it can’t be denied that ‘Best Friends’ is a hell of a record, a singalong anthem that pays tribute to young boys breaking free of their parents and striking out against the world, holding pints at the same time obviously.

But was it the best song of 2012, well as you will find out later on, no it wasn’t, not even close.  I mean if I was John Peel and I was compiling a Festive Top 50 this would struggle to get into the Top 15 but that chorus is pretty close to being flawless.

Also In Contention: Last of the Summer Wine – which was the B Side to ‘Best Friends’ and also featured on their debut album ‘180’.

View all posts by wycranything

Well, I'm dyslexic so writing about something I love: Music, might help but it's most likely just full of mistakes. That title is also lyrics from The Drones song called I Don't Want To Change. Oh, my name is William and thanks for having a look.

Steve For The Deaf

Certain Songs Get Scratched Right In

Alternative isn't a genre; it's a lifestyle.

The Light Appears
Plain Or Pan

Outdated Music For Outdated People since 2007

The Sound of Being Ok

What's It All About?

A Nostalgic Journey Through the Tracks of My Years

some half decent tunes, personal ramblings and the odd rant

A History of Dubious Taste

Where there's no such thing as a Guilty Pleasure